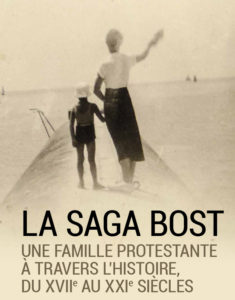 Title of the panels 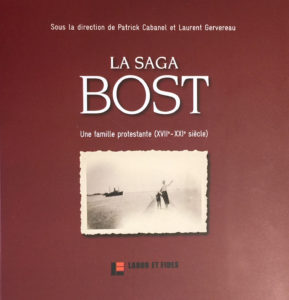 Why should we be interested in a family for such a long time (from the 17th century until today) ? Probably for their uniqueness. This family of proestant origins, endured consecutive persecutions during the Révocation of Édit of Nantes by Louis XIV. Ancestor, Jean Laurent Bost (of Beaumont-lès-Valence in the Dauphiné), took refuge in Geneva in 1720. These strong personalities each merit a book of their own.

Without wishing to mention only one : Friend Bost, awakening priest, John Bost constructed with his wife Eugénie the Foundation which carries his name, Théodore Bost pioneer in America, with Sophie Bonjour, Charles Bost protestant historian, Pierre Bost writer and author with Jacques Aurenche of famous French cinema scenes such as Traversée du Paris (The crossing of Paris), Jacques-Laurent Bost an intellectual friend of Jean-Paul Sartre and Simone de Beauvoir, the singer Renaud…
It is across more than two centuries of history that you are invited to browse these rare images, french, european and of other continents. Here also a way of uncovering amazing lives of people, women and men, who had in common each of them a demanding idea, of existence and often a phrophetic vision.

The work has been carried out with the help of the Fondation John BOST and of the home of John et Eugénie Bost.

Buy on line “La Saga Bost” by clicking on the link below :